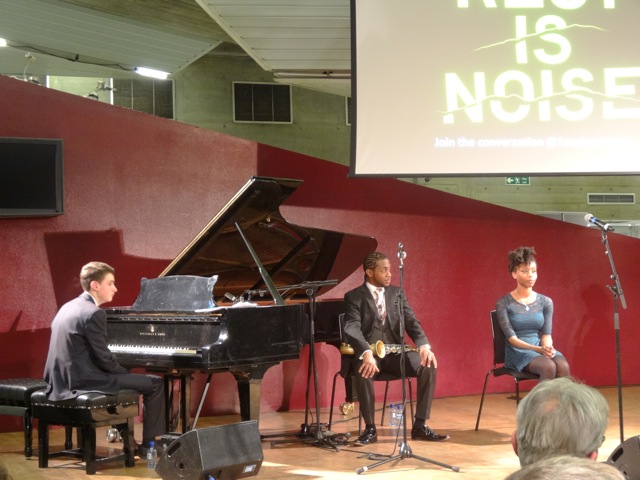 On 24 March, in the Front Room at London’s Queen Elizabeth Hall,  members of Tomorrow’s Warriors – Nathaniel Facey (sax), Charlie Stacey (piano) and Cherise Adams-Burnett  delighted the audience and made us incredibly proud when they provided musical illustrations for Catherine Tackley’s pre-concert talk for the collaboration between BBC Concert Orchestra and our very own Nu Civilisation Orchestra. Congrats to our brilliant guys and girl, and especially to Cherise who’s outstanding vocals moved some members of the audience to tears with her rendition of a beautiful African-American spiritual.

Also a little  reminder to tune your radios to BBC Radio 3 (90-93 FM) Afternoon on 3  on Wednesday 17 April at 2.00pm to hear the broadcast of the concert that followed this pre-concert talk – our Nu Civilisation Orchestra‘s performance with the BBC Concert Orchestra for the ‘Hidden Voices’ concert as part of Southbank Centre’s The Rest Is Noise Festival. The concert focused on African-American inspired music from the first part of the 20th Century and featured a set of music by William Grant Still and Henry F Gilbert performed by the BBC Concert Orchestra conducted by Keith Lockhart, followed by a celebration of Duke Ellington – a medley of the composer’s Cotton Club repertoire performed by the Nu Civilisation Orchestra conducted by Peter Edwards and the wonderfully pictorial, Harlem  which saw both orchestras combine as one under Lockhart’s baton. Fantastic stuff!