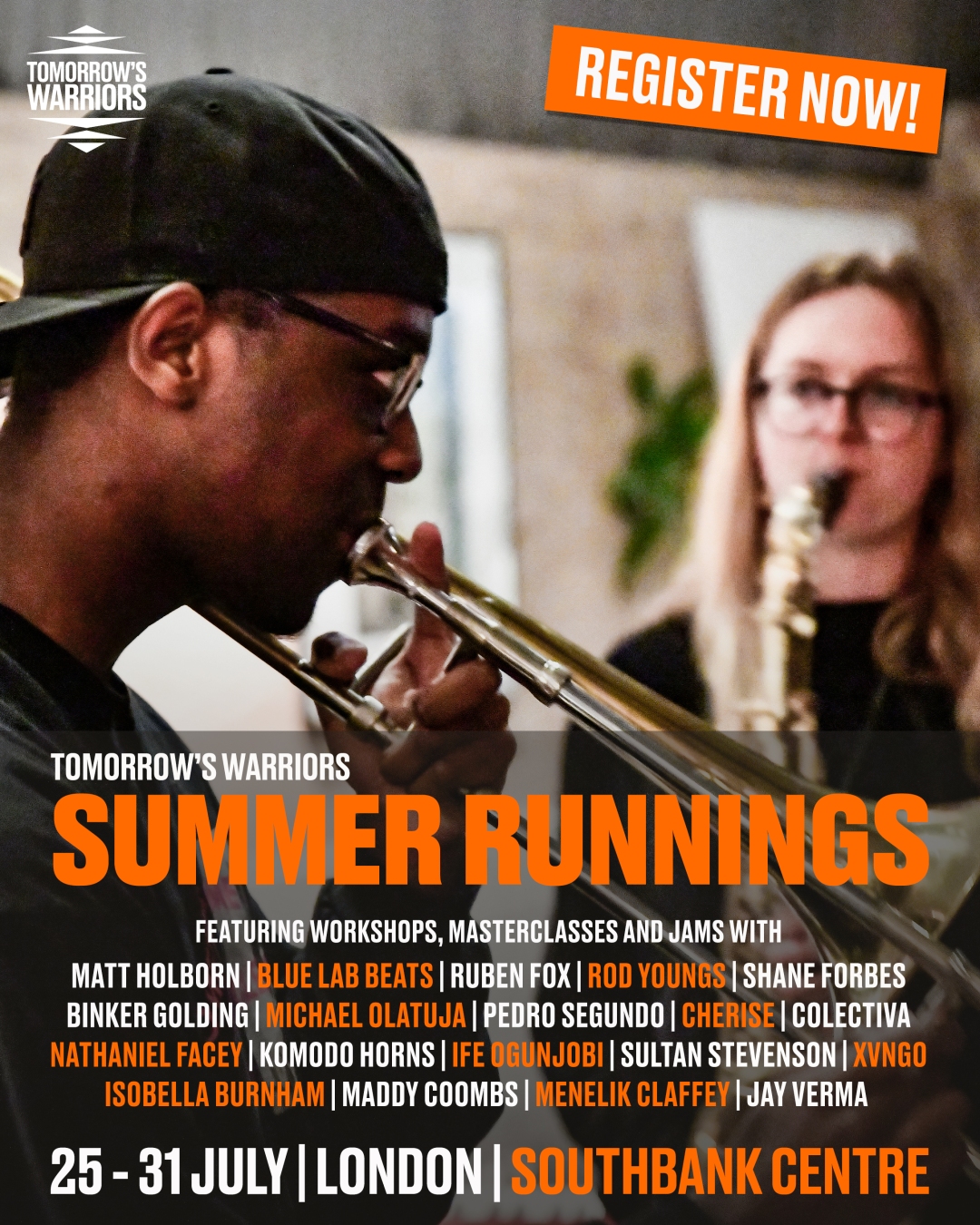 Summer Runnings 2022 is nearly here – our weeklong season of workshops, masterclasses and jams taking place at the Southbank Centre from 25-31 July, for young musicians aged 11-25.

We’ve got so many of our incredible alumni supporting us this year, including a Productions and Beats workshop with Blue Lab Beats, some amazing special guests including bass maestro Michael Olatuja, percussionist Pedro Segundo, and Latin ensemble Colectiva, plus a whole stack of great jams to get involved with.

We’re really excited about the line this year, and this will book fast!

Here’s the full timetable of what’s on, with who and when.  Please remember that when you are booking your sessions and planning your travel, we ask that all participants arrive 30 minutes before the planned start time for registration.

The high demand for places might mean that we can’t fit everyone in, so completing your registration form online is not a guarantee of a place.  However, we will be working fast to make sure we confirm all places by Thursday 21 July.

Here’s some short introductions to each of our amazing Summer Runnings 2022 session leaders who’ll be taking us on a journey through workshops, masterclasses, jams, talks and Q&A sessions:

Blue Lab Beats: Production and Beats Workshop
One of the fastest-rising production duos in the world right now, with a Grammy nomination for their work on the Angelique Kidjo album Mother Nature, and a MOBO nomination for ‘Best Jazz Act’ in 2021 testament to their rise, Blue Lab Beats craft a supple, wide-ranging sound that blends boom-bap grooves and jazz-funk hooks are wide-ranging influences inspired by the pioneers of hip-hop and the music of the African diaspora; a sound that tells of London, of today, while hinting at the future.

Cherise: Vocal Workshop
A truly multi-faceted artist, Cherise is fast proving herself to be one of the most fiercely talented young musicians around. Her effortless, world class vocals alongside her honest, soulful song writing manage to be simultaneously both contemporary and timeless.

Colectiva: Latin Music Workshop & Jam – an introduction to la clave and Latin music
This workshop is designed to introduce the most important elements and concepts of Latin music.

We will look at the basic building blocks of the genre and the relationship between different instruments to the clave, the rhythmic patterns and the heartbeat of Latin music.

Colectiva’s workshop leaders:
Lilli Elina has a Master’s in Music from SOAS University, she’s a multi-instrumentalist who also is part of the musical projects Penya and Wema. Founder and director of the record label Liminal Recordings.

Lya Guerrero drummer and percussionist has an enriched and eclectic musical background. Her Venezuelan and Portuguese heritage alongside growing up in Latin America brings forth a distinct multicultural style.

Binker Golding: ‘Writing an Album’ Masterclass
Binker Golding constantly confounds expectations. His duo act with Moses Boyd opened the doors to TV appearances and international touring with its raw yet accessible streetwise distillation of beats and melody: his role as sideman with Mr Jukes and Zara McFarlane might lead some to suppose that his muse tends towards the radio friendly. Yet he’s simultaneously involved in a very progressive free-improv duo with Elliot Galvin, takes an active role as an educator with Tomorrow’s Warriors, and has been described by Gary Crosby as “an incredible composer, probably the best we have now.”

Matt Holborn: Jazz Strings Masterclass
Matt Holborn is a Hull-born improvising violinist based in London. Performing in many capacities, Matt has appeared at countless international jazz festivals and venues and has become a leading figure in jazz violin. He regularly teaches workshops and gives one to one lessons in jazz violin at SOAS University, Leeds College of Music and Middlesex University.

Shane Forbes: Rhythm Section Group Improvisation workshop
Shane Forbes is co-leader/founder of the award-winning group EMPIRICAL who have been a force for representing UK jazz for over a decade. Winner of the Worshipful Company of Musicians’ ‘Young Musician of the Year’ award in 2009 along with MOBO and Parliamentary Jazz Awards as a member of the internationally acclaimed quartet ‘Empirical’ (which he co-founded and co-leads), drummer Shane Forbes is without question one of the most in demand musicians on the UK jazz scene.

Ruben Fox: Sax Workshop & Jam
Hailing from Brixton, south London and residing in Harlem, New York saxophonist Ruben Fox is one of the brightest young stars on the scene today. Noted for the sophistication of his sound, the maturity of his compositions and the sensitivity of his ballads. Fox has performed with legends such as Wynton Marsalis, Barry Harris, Roy Ayers, George Coleman, Roy Hargrove, Albert ‘Tootie’ Heath and Johnny O’Neill. He is also associated with many great artists of his generation, Jon Batiste, Mwenso & The Shakes, Russell Hall, Reuben James, Emmet Cohen & Mark Kavuma.

Komodo Horns feat Rosie Turton, Flo Blu and Poppy Daniels: Brass Section Workshop
Komodo Horns exploded onto the London Music scene in 2020, featuring Flo Blue on saxophone, Poppy Daniels on trumpet and Rosie Turton on trombone. Between them they have worked with an array of artists, including Arlo Parks, Celeste, Muva of Earth, Jitwam, & Hollie Cook, making them some of London’s most in-demand session players. This workshop with Komodo Horns will focus on developing a section sound by playing through some of their arrangements, exploring ideas for writing horn arrangements, and a question-and-answer session on topics such as starting your own horn section. There will also be space for any players who would like to bring in their own arrangements to workshop them.

Pedro Segundo: Percussion in Jazz Workshop
Pedro Segundo is one of the most in-demand percussionists and drummers on the international circuit.
Known for his infectious and enthusiastic playing style in any genre, 2017 sees him on tour with Judith Owen, as well as performing with the Kansas Smittys at their own Club in Broadway market and festivals around UK and Europe.

At this Workshop Pedro Segundo will explore the ways you can add percussion to a drum kit.

Rod Youngs: Drums Masterclass
Rod Youngs is a musician, composer and educator of immense talent and refinement. His interest in music began in his youth and has spawned into a career that has spanned over two decades and taken him to over thirty countries. His musical background encompasses many genres from classical, jazz, and R&B to pop, rock, and hip-hop. He holds a Bachelor of Music Degree in Applied percussion from Howard University. He also studied with former principal timpanist of the National Symphony Orchestra, Fred Begun and in 1985 he was chosen to study jazz performance at the Eastman School of Music in Rochester, N.Y. under the tutelage of Keith Copland. A native of Washington D.C. Rod’s consummate musicianship has garnered him a wide variety work from concerts and recordings to sessions for radio, TV and film.

Nathaniel Facey: Sax Masterclass
One of the UK’s finest and most exciting saxophonists, Nathaniel Facey has been a prominent figure on the European jazz scene for over a decade, and has worked with the likes of Jack DeJohnette and Jason Moran. A truly unique sound that, while reminiscent of giants such as Charlie Parker, Eric Dolphy, and John Coltrane, is undeniably his own; full of ferocious passion and lyrical mastery. A founding member of the multi award-winning group Empirical that have toured the world, audiences are constantly blown away by Facey’s command over his instrument and the stage. He is undoubtably always one to watch, whatever line-up he is involved with, and is sure to bring an intensity that is rarely seen in musicians.

Ife Ogunjobi: Trumpet Workshop & Jam
London raised trumpeter and composer; Ife Ogunjobi is a rising star in the London Jazz scene. Raised in a Nigerian household, as well as growing up in south east London, his surroundings have enriched his music with various genres such as jazz, Afrobeat, grime and hip-hop. His musical concept removes the barriers between the different genres of music and portrays an authentic London sound.

A vital contributor to the London jazz scene, Ife’s live and studio collaborations have been critically acclaimed whether it’s touring worldwide on stages such as Glastonbury’s West Holts Stage with Ezra Collective, or performing at sold out arenas with Grammy Award winning artist Burna Boy

Sultan Stevenson: Big Band Workshop
Pianist Sultan Stevenson is one of the fastest emerging young artists on the London jazz scene. His trio is already established as an outfit to catch when billed to play live and is being tipped for success on national and international stages.

Sultan is an alumni of the famed Tomorrow’s Warriors jazz artist development programme, and now a member of its Music Leader Faculty. His music combines elements of the African-American jazz tradition as well as his own Caribbean cultural experience. His approach to composition and playing has already been compared to that of McCoy Tyner and Esbjörn Svensson and, over the past year, his Trio has played standout gigs at Jazz re:freshed, the Vortex and the Jazz Café where the band opened for the great Billy Cobham. Their Pizza Express gig during the 2021 EFG London Jazz Festival was a sell-out.

“His way of placing silences and making a simple four-note lick grow into something significant showed an incipient master at work.” The Telegraph

Jay Verma: Piano Workshop
Jay Verma is a UK based pianist/keyboardist influenced by jazz, folk, grime, electronic and classical music. Jay adds enormous value to a variety of projects through his deep understanding of harmony, melody and groove. His sense of aesthetic and his versatility have led him to major performances for COLORS, BBC, Facebook, etc. In 2017, Jay was awarded a scholarship to study at London’s prestigious Guildhall School of Music and Drama.