Had he lived, today – 29 November 2016 – would have been the 102nd birthday of our dear friend, the late great double bassist extraordinaire, Coleridge Goode. We were just browsing through photos of Coleridge as a young man when we caught the resemblance to another super-talented jazz musician we know and greatly admire…the wonderful pianist and composer, Peter Edwards.

They are unrelated and three generations separate these two musicians, yet we think the resemblance between them is uncanny. Do you?

Peter is an alumnus of our Tomorrow’s Warriors programme and member of the TW music leader faculty. He is also the musical director of the Nu Civilisation Orchestra.  You may have seen him in action recently when he led one of the orchestra’s small ensembles in a live performance of Miles Davis’ music for a special screening of John Akomfrah’s moving film, The Stuart Hall Project – a huge success, playing to a sold out audience at Rich Mix, London.

Sadly, Coleridge is no longer with us, rest his soul, but he’ll be in our thoughts today as we sip a rum punch in his honour. 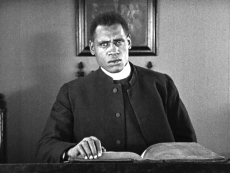 Happily, Peter is still with us, and you can catch him on 5 December at BFI Southbank when he leads another small ensemble of the Nu Civilisation Orchestra for the world première of  a score commissioned by the British Film Institute as a live soundtrack to Oscar Micheaux‘s ‘race film’, Body And Soul – the film in which the bass singer, actor and civil rights activist, Paul Robeson made his screen debut.

To find out more about the Nu Civilisation Orchestra, visit their website or, to book tickets to see Body And Soul, hit the button below! Quote the booking code SOUL and you can get tickets at the special rate of £5.00!