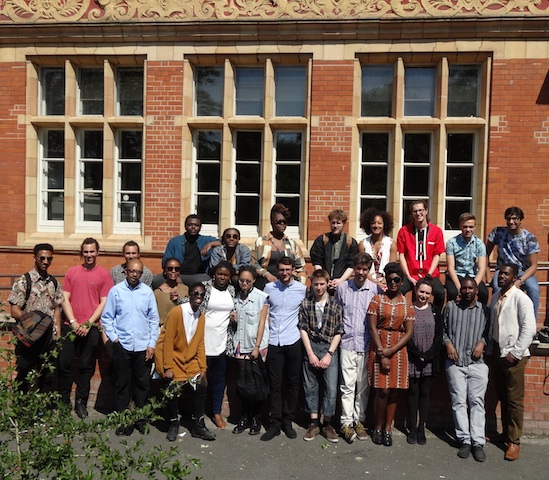 Fresh from their debut performance on BBC Radio 3’s Jazz on 3 in May, TWYO have continued to explore brand new repertoire created within the Tomorrow’s Warriors community. This time it was the turn of TWYO band member and Tomorrow’s Warriors Apprentice Music Leader, Cassie Kinoshi to write and direct a suite of music composed especially for the orchestra as part of her final exams at Trinity College of Music. Her recital at Blackheath Halls on Thursday 18 June was a great success, with the premiere of three pieces – Bea’s Dream, He Was My Sea, and Into The River Of Kongamato –  one of which she set to animation.

Said Cassie afterwards: I was so pleased to have access to the Tomorrow’s Warriors Youth Orchestra to perform this work for my recital. I’m more used to playing in TWYO than writing for it, so it was a great opportunity to try my hand at big band composition and directing a big band, and gave me first-hand experience of dealing with some of the challenges of working with such a large group.

We’re delighted to support such composition talent coming through the Warriors community and look forward to hearing what else Cassie has in store for TWYO. It’s so great to witness our young musicians’ growth and progression – as well as being a member of TWYO, one of our emerging composers and an Apprentice Music Leader, Cassie is one of the original members of our Female Collective, and now a permanent member of the award-winning all-female band, Nérija that evolved out of the Collective.

Keep your eyes peeled at TWYO concerts in the autumn as we introduce other band members and graduates taking the lead in directing their own compositions and arrangements as part of our Young Composers & Arrangers Programme.

If you are interested in supporting our Young Composers & Arrangers Programme, please do get in touch. We’d love to speak with you about different ways in which you can support the development of talented young musicians!