Tomorrow’s Warriors and the Harlem Hellfighters

A posse of the most talented new players to emerge from recent editions of Tomorrow’s Warriors are joining acclaimed US composer and bandleader Jason Moran and his stellar rhythm section, the Bandwagon, in the first roll-out of a major new piece that celebrates the legacy of the iconic bandleader and composer James Reese Europe, commissioned by 14-18 NOW,  Serious, the Kennedy Center Washington, and Jazzfest Berlin.

Jason was keen to involve musicians of the same age as the musician/soldiers who signed up with the 369th Division – the Harlem Hellfighters –  when the USA entered World War 1 in 1918 – and event producers Serious made an immediate call to our Artistic Director, Gary Crosby….with the result that Ife Ogunjobi (trumpet); Joe Bristow (trombone); Hanna Mubya (bass trombone, tuba); Mebrakh Johnson, Kaidi Akinnibi, Alam Nathoo (reeds) will play alongside tuba player Andy Grappy, bassist Tarus Mateen and drummer Nasheet Waits in a band that plays at the Barbican on October 30, followed by UK dates in Cardiff, Paisley as well as the Jazz Festival in Berlin on November 3.

Jason Moran – The Harlem Hellfighters promises to be a terrific occasion, with specially created visuals created by Jason, John Akomfrah, and Bradford Young, the cinematographer who worked with Jason on the film Selma.

You can find out much more by visiting https://jasonmoranharlemhellfighters.com/ 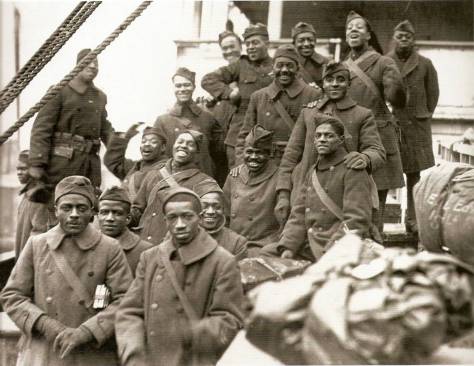